Traditional media continue to dominate global advertising spending, and most show no signs of falling off for the time being, according to new data released by Nielsen. TV, which commands the lion’s share of global ad budgets, saw a 4.3% increase in expenditures for the year, reaching $350 billion. Cinema (movie theaters), radio, and outdoor advertising saw growth rate above the 3.2% overall average, up 5.8%, 6.1%, and 7.7%, respectively. Other mediums such as magazines (-1.6%) and newspapers (-0.2%) saw slight declines in spending, they still accounted for more than one-quarter of global spending. 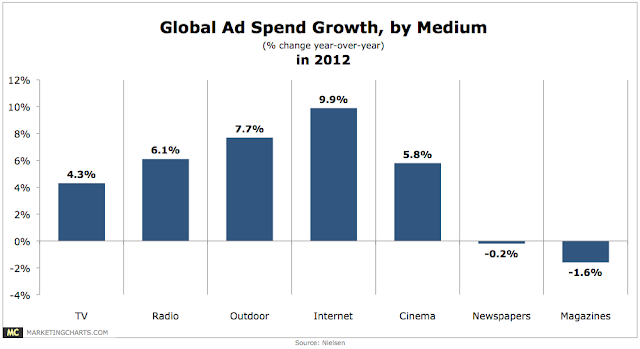 Online ad revenues, recently reported to have increased by 15.2% in the US, predictably was the fastest-growing advertising medium on a global basis, up by 9.9%. Online ad measurement was limited to the display format, though. In the US, display ad revenues grew by 13.4%.

At 62.8% of revenues, TV accounted for easily the largest portion of global advertising spend, followed by newspapers (19.5%) and magazines (8%). Radio (5.2%) and outdoor (2.3%) each also grabbed a higher portion of spend than the internet (1.9%). The internet’s share of the pie seems quite low, and it’s unclear if that’s because it was measured in a smaller subset of markets.

Posted by Internet Builder Consulting at 7:00 AM