Americans Use Social Networking More than Other Countries 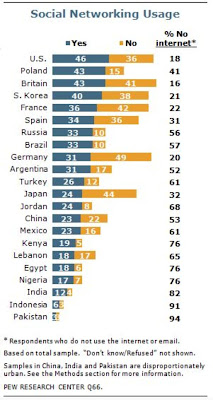 Americans are most likely to use online social networks, according to a new study from the Pew Global Attitudes Project. Among the 22 publics surveyed, Americans most often say they use websites like Facebook and MySpace: 46% use such sites, 36% use the Internet, but do not access these sites, and 18% say they never go online.
The survey finds three countries close behind the US in social network usage. In Poland (43%), Britain (43%) and South Korea (40%), at least four in 10 adults say they use such sites. And at least a third engage in social networking in France (36%), Spain (34%), Russia (33%) and Brazil (33%).

Germany and Japan Have High Internet Usage; Low Social Networking Use
Germans and the Japanese stand out among highly connected countries for their comparatively low levels of participation in social networking. While 31% of Germans use these types of sites, 49% go online at least occasionally but choose not to use them. In Japan, 24% are engaged in social networking, while 44% have Internet access but are not engaged.
Among the 22 countries polled, social networking is least prevalent in Indonesia (6%) and Pakistan (3%). In both nations, more than 90% of the population does not use the Internet. 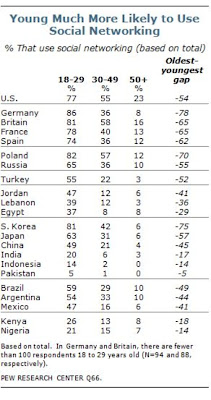