US adults 50 and older have increased their social networking use from 22% to 42% in the past year, according to data from the Pew Internet & American Life Project.
Half of Adults 50-64 Use SocNets 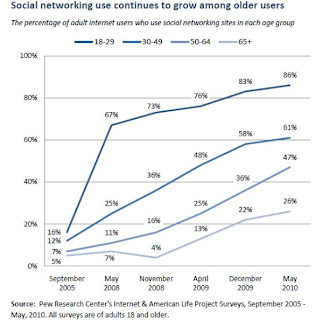 During the past year, the growth of social networking adoption among internet users ages 18-29 paled in comparison with the gains made by older users. Between April 2009 and May 2010, internet users ages 50-64 who said they use a social networking site like MySpace, Facebook or LinkedIn grew 88%, and those ages 65 and older grew 100% in their adoption of the sites; compared with a growth rate of 13% for those ages 18-29.
Older Adults Increasingly Share Daily Updates 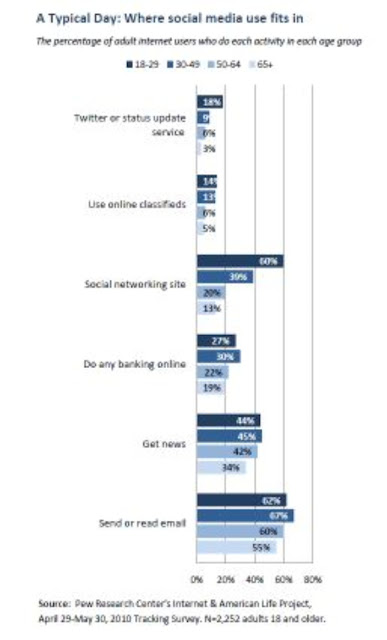 The use of Twitter and other services to share status updates has also grown among older users, most notably among those ages 50-64. While just 5% of users ages 50-64 had used Twitter or another status update service in 2009, 11% now say they use these tools. On a typical day, 6% of online adults ages 50-64 make Twitter a part of their routine, up from the 1% who did so in 2009.
One in five (20%) adults ages 50-64 say they use social networking sites on a typical day, up from 10% one year ago. Likewise, 13% of online adults ages 65 and older log on to social networking sites, compared with just 4% who did so in 2009.
Older Adults Maintain Interest in Email, Online News

The overwhelming majority of Americans (92%) use multiple platforms to get news on a typical day, according to other recent findings from the Pew Internet and American Life Project. Americans get their news from a combination of on- and offline sources, including national TV, local TV, the internet, local newspapers, radio, and national newspapers. Six in ten Americans (59%) get news from a combination of online and offline sources on a typical day, and the internet is now the third most popular news platform, behind local television news and national television news.