The closest competitor to Facebook in the smartphone app popularity contest is Google Play, with its 54% which is significantly less. Google Search had 52.2% usage followed by Pandora Radio at 48.2% and YouTube at 48% rounding out the top 5 apps.  Smartphone use continues to rise, up 0.5% points from the previous month to reach 62.5% of the mobile market. At this time last year, use was at 51.9% and the year before 38.5% – underscoring just how fast smartphone use has grown. 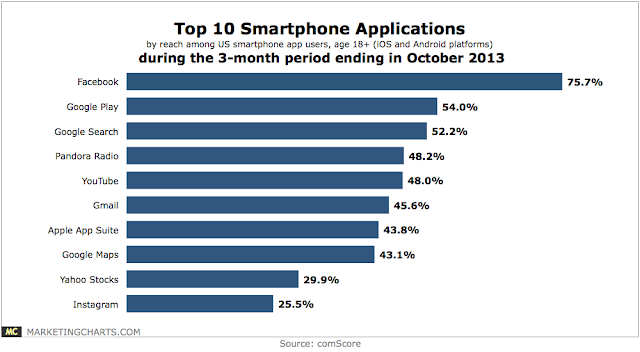 Android’s 52.2% share of the smartphone market was up from its 51.8% share during the 3 month average ending in July. Apple’s share also inched up by a hair, adding 0.2% points to 40.6%. With that 40.6% share, Apple maintained its considerable lead over Samsung among equipment manufacturer's, despite the Samsung's 1.3% point increase to 25.4% market share. HTC moved 1.3% points down to 6.7% share.   Instagram continues to see growth and must be incorporated as part of any successful Social Marketing and SEO solution.

Contact the social marketing experts at Internet Builder Consulting for an expert online marketing package, optimization and training from only $350 online or call 816-842-7774