Businesses Are Starting to See the Importance of Social Marketing

U.S. businesses assign moderate importance to social networking as a technology tool, according to a recent study from Gartner.

Asked to rate various technology tools on a scale of 1 to 7 (7 meaning extremely important and 1 not important at all), the average respondent rated social networking tools at slightly more than 4. Social networking only ranked ahead of four other tools, all of which have a social media aspect: wikis, social tagging/bookmarking, web feeds and blogs. 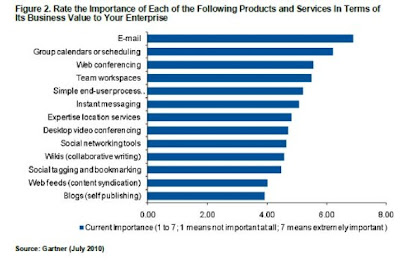 Email was clearly ranked as most important, with an average score near 7. The only other tool to receive an average score of more than 6 was group calendars/scheduling. The top five tools were rounded out by web conferencing, team workspaces, and simple end-user tools.
Social Networks Hold Future Importance
Despite their relatively low rating of the current importance of social networking tools, respondents gave it the second-highest score (more than 5) when asked to rate tools for their likely increase in future importance by 2012. Only team workspaces, with an average score close to 6, were rated higher in terms of likely increase in future importance. 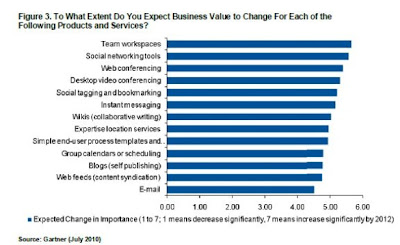 Surprisingly, email was last in terms of its expected change in future importance, scoring about 4.5. This suggests respondents think email will retain its current high level of importance while other tools will become significantly more valuable. No tool is seen as becoming less valuable in the next two years.

Email Completely Deployed Almost Everywhere
Email is ubiquitous with complete deployments at the organizations of 94% of the respondents; while group calendars or meeting scheduling, web conferencing, instant messaging and team workspaces are in full deployment or are being deployed at more than 50% of the organizations surveyed. 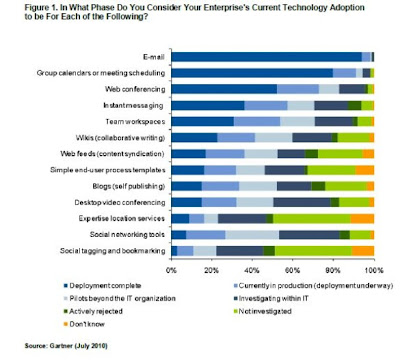 ﻿Wikis are also adopted quite widely, with more than a fifth of the respondents reporting complete deployments and almost just as many again with deployments under way. The wiki is the most readily adopted newer social software technology with full or production deployments at more than 40% of the organizations surveyed.
Desktop video conferencing, blogs and web feeds are beginning to make inroads in many organizations with about a third of them reporting these technologies as either in full or production deployments. Expertise location, social networking tools, as well as social tagging and bookmarking are less widely deployed, with less than 10% of the organizations surveyed reporting full deployments.

Most Companies Have Social Media Strategies
Three-quarters (72%) of companies currently have a social media marketing strategy, according to a new study from King Fish Media, Hubspot and Junta 42. Of the 27% without a social media marketing strategy (1% were undecided), 80% plan to have one within the next 12 months. Furthermore, only 11% of companies without a strategy definitely do not plan to implement one in the next 12 months, with 9% undecided.

Does your business or organization need expert social networking and social media marketing setup, training or consulting?  Contact the experts at Internet Builder Consulting or visit us online at http://www.socialmarketingbuilders.com/ for examples and inexpensive options to get you going online!